I finally took the plunge. I am just getting back into building my own radio gear after a few years off the wagon operating primarily QRO commercial gear. As I have built gear in the past, I found it very satisfying to put something together that works and then use it to make QSO's. However, while I was away from the kit building scene there was a step change in the technology of radio components and the methodology to build them, that is SMD, (surface mount devices). These are very small capacitors, resistors, diodes, etc... that greatly reduce the size of whatever you are building. Let me repeat, very small. They are tweezers and magnifying glass kind of small. I would say simply, that I was very intimidated by this change. However I wanted to learn.

When Steve, KD1JV, kitted another run of his MTR (Mountain Top Rig), I wanted one. It is however an SMD kit, but I thought why not take the plunge. However when the kit arrived with its cool looking case and I looked at the components I thought maybe I should have someone else build this kit. I didn't want to ruin such a cool radio with my learning mistakes. So I outsourced that one. However, I still wanted to learn SMD construction. Somehow I felt like a QRP wimp because I couldn't build SMD projects. So, what to do?

As I searched the QRP kit world, I found the perfect project. The SMK-2, a kit from Doug Hendricks, www.qrpkits.com, is a 300mw, 40m crystal controlled transceiver. It is specifically designed for SMD training. So I ordered the kit. 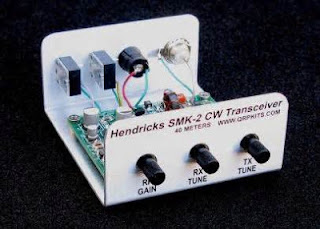 There are a couple of methods to build SMD projects that I wanted to try. The first is the solder paste, hot plate method. To be brief, you put small amounts of solder paste on the component solder pads and then place the components on the pads. You should use a syringe to apply the paste.  You can do this with as many components as you feel you can keep in place. It is a delicate operation but when done properly can save a lot of time. You should only have one "cooking' if you will, so put as many components on the board this way, if not all, as you can. I chose to do a few of the capacitors. After applying the paste and placing the components you put the board on a cooking griddle set at 200 degrees F. When the solder paste starts to smoke you use a hot air gun, (available at hobby stores or with commercial SMD soldering stations), and direct the hot air at the components. Before your very eyes the solder adheres and makes a very nice looking solder joint. When completed, let the plate cool before removing the board.

After I let the board cool, I wished I had set more components in this manner as the joints looking almost professionally done. However, I wanted to learn to hand solder these small SMD as well, so I would have plenty of  small parts to practice on.

Hand soldering requires some magnification device. I use a relatively cheap, lighted magnifying lamp like the one below. It is a 2X glass with a small 5X circle that you will need to identify parts. 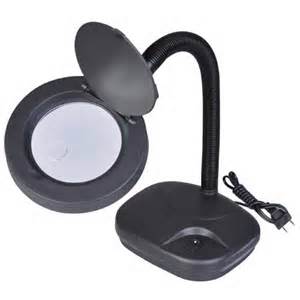 I haven't finished the project yet, but have put down the capacitors, resistors and diodes, so the bulk of the work is done. One thing to be aware of, try to do the work where you can find dropped parts. I dropped a resistor onto the carpet in my shack and had to use a nylon trap on a vacuum cleaner to find it.

I will let you know when I pass the smoke test.
Posted by Mike Crownover AD5A at 8:50 AM

Email ThisBlogThis!Share to TwitterShare to FacebookShare to Pinterest
Labels: Projects