I've been slowly getting back into backpacking shape. Not only physically, (I recently had my annual physical and lasted 16 minutes on the treadmill test(faster and steeper every 3minutes), not bad for an old man), but also getting my equipment, both radio and packs, etc.., updated. So it was time for a real test to see what works and what doesn't as well as what I forgot to include.

So a few days ago, my son AB5EB, invited me on a backpacking trip with he and my two grandsons, Reid, KF5GYE and Boogie, KF5GYD, ages, 10 and 12 respectively. Well, of course I could go. Our destination was Lost Maples State Park in the Texas Hill Country. What a beautiful spot. We would hike 4 miles to one of the high points in the park, ~2,300 ft. elev., making a 550 vertical climb and camp for the night. The last 330 feet of the climb come in the last quarter  mile of  the hike, so it's pretty pedestrian until that point.

From the backpacking perspective, I planned pretty well. A lightweight MSR Nook tent served me well, however, my old 20 degree sleeping bag and Thermarest  pad need updating, lighter versions exist. My titanium alcohol cook stove and titanium cook pot worked great. One omission, I didn't bring any thing to sit on, so I need to get a Thermarest chair set-up that allows me to make a seat out of my sleeping pad, sitting on the ground gets old. I used to have one, but I have no idea where it is. One lesson that I haved learned when carrying everything you need on your back is to dual purpose your gear as much as you can. An example, for eating, I carry a plastic spoon and a coffee cup. If  I don't eat the backpacking meal from the bag, I use the coffee cup to eat from and I have very little clean up. While I didn't bring a trekking pole on this trip, I could easily  use one to mount the 13' pole on, after I figure out the adaptor issue. A trekking pole also works well as a base for the Buddi-stick vertical.

I would also say the radio set up worked as well. My main goal was to test the new 13' telescoping pole that I bought from SOTA Beams. I like this pole because it is much easier to pack in a backpack and it fits easily into a suitcase. Of course it's only 13'. I set it up on the $10 tripod that I use with my AlexLoop, that gives it another 4 feet or so. Both the telescoping pole and small tripod slide easily into the slot behind the sidepockets on most backpacks. 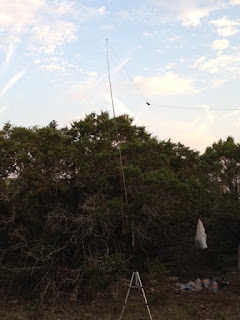 I used two antenna configurations, ﻿the 40 -6 End Fed antenna from the Emergency Amateur Radio Club (EARC) in Hawaii, using the 31' wire they provide with the kit and the LNR 40/20/10 Trail Friendly Antenna. The results were hard to compare as I used each during different parts of the day and only on 20 meters. I did tune the EARC antenna on 15 meters, but the band was basically dead to me. I used the Elecraft T-1 tuner and the ATS-4B so matches were easy to find. I would say that the LNR had louder signals as you would expect from a resonant antenna. The trade off of course is that that EARC can be tuned on most any band. I managed to work both coasts with both antenna's so they both work. I will probably stick with the LNR for a short term SOTA activation, but the EARC might be good if I wanted to  try the higher bands for a little DX.

BTW, from a backpacking perspective, when carrying tent, sleeping bag, food and water, etc..., I deemed the AlexLoop to be too big to pack, at least for long hikes. I would have had to go to a bigger back pack to accommodate it. Day hikes, of course, are a different story. Now, if I had a goat or pack mule, that would create some opportunities to carry more as well. 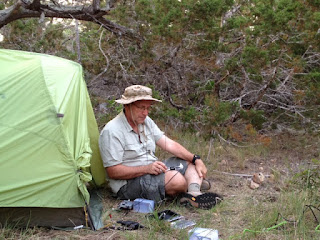 I also employed my rigged up operating desk. I used a backpacking style cutting board and a couple of bulldog clips. I printed the log pages from a template found on-line and have some waterproof ink jet paper on order. 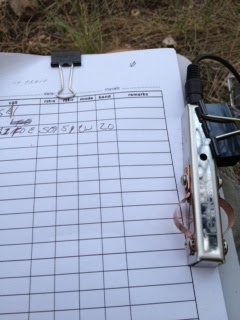 It was a fun trip. Backpacking, enjoying the outdoors with my son and grandsons and playing radio﻿. It doesn't get much better than that.
Posted by Mike Crownover AD5A at 11:47 AM