The fields from a small circular loop are given by:

Now that I understand how they work, I thought I would look into available loop antennas .Loop antennas are nothing new and have been used for decades, primarily for receiving as they are very narrow from a transmitting perspective.
Historical references in portable magnetic loop antennas

Balkan’s War in 1942                                          Alder-shot England, November 1937
I started looking into commercial loop antennas and came across the Alexloop. The Alexloop is named after its designer, Alex, PY1AHD.
While researched the Alexloop, I watched some video of a Summit on the Air expedition using the antenna and heard him working into Europe with it, QRP. So I looked into the antenna.The antenna comes in a convenient carrying case, ideal for portable operation and includes a tuning mechanism that allows you to tune to maximum noise, indicating the best match between the antenna and the transceiver. It is designed to be handheld, but you can mount it on tripod if you want.
AlexLoop Walkham Small Magnetic Loop

I ordered the antenna and it recently came in the mail. So I put it together, which is fairly simple, hooked it up to my FT-817, running 2 watts, with a Te Ne Ke and sat out on my back patio to see if I could make a QSO. I answered the first CQ I heard, a station near Detroit (I'm near San Antonio, TX), and he came right back to me. The received signal was huge an he gave me a 559, but clearly had solid copy on me as we had an extended QSO, not just a signal report. He did ask about my power again because I don't think he could believe it the first time.
My conclusion based on the experience of others and my experimentation is that the Alexloop is a viable portable antenna that will yield good results. 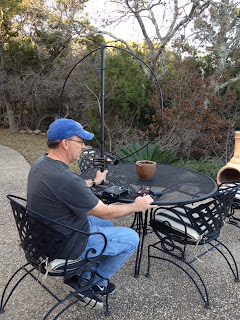 QSO with Alexloop
Posted by Mike Crownover AD5A at 7:39 PM