The Solar Superstorm of 2012

As we hams bemoan the fact that sun spots are sparse currently we can't forget the power of the sun. Below is a link to an interesting article, recently published, and  a video on what could have been a disastorous Coronal Mass Ejection (CME) in April of 2012.

It never hurts to have a back-up plan.

Posted by Mike Crownover AD5A at 2:04 PM No comments:

Last February I celebrated 25 years in Amateur Radio. Unlike many who were licensed at a  young age, I didn't get my ticket until I was 32 years old. In fact I recieved my license the same day that my then 12 year old son,Michael received his. We had consecutive calls, KB5ILS and KB5ILT. We subsequently upgraded to extra and received AB5EA and AB5EB. My son kept the later call but I recieved the vanity call AD5A in 1996.

As a teenager my cousin exposed me to shortwave listening. As many of us will say, it was magic to be able to sit in my bedroom and hear signals from around the world. I was mesmerized. I couldn't wait for the mailman each day to see if a QSL card might arrive. However, there were no local hams, learning morse code seemed impossilble, so I never pursued my ham license until years later, when I came across a Gordon West course in the local Radio Shack. The course cover proclaimed that a novice license was good for 10 years and you could talk on 10 meters. I bought the course, my 12 year son listened along as I did, we learned the code together.

So fast forward 25 years, what has changed? I supposed in many ways things have changed a lot. Things like:

I'm sure I'm missing a few things, but the efficient access to information is much easier now. QSL routes used to be one of the great mysteries of the world, in fact, INDEXA used to have a net on 14.236 that dipensed the lastest QSL route news. Setting schedules required weeks/months of letter writing. Increasing your DXCC count meant turning the dial, find the pile-ups and then back down to figure out the split, find which DX station might be on and then jumping into the fray . Logging was manual and data mining your log for forgotten contacts was a laborious task, but just as rewarding. DXing news came in weekly newletters not daily emails.

But there are some things that haven't changed:

- The concern over how to fund expensive expeditions
- Frequency cops
- QRMer's
- Complaining about the cost of getting a real QSL card
- The thrill of receiving that QSL card
- The excitement of a new one
- The magic of wirelessly communicating around the world
- Dayton, Friedrichshafen, DXCC, IOTA, WABA, etc....

Here is a toast to the next 25 years, God willing.

Email ThisBlogThis!Share to TwitterShare to FacebookShare to Pinterest
Labels: Personal

I read that July 18th was the first day without sunspots since sometime in 2012. That's not a good sign for sure. I'm definitely not a solar expert, but I do know that zero sunspots is bad for propagation. That said, last night I worked VK5CZ at 0124z on 15m operating QRP from a summit in Australia.Then this morning I worked GW0PEB/P on 15m from a summit in Wales and a couple minutes later snagged HB9BCB/p on 17m from a summit in Switzerland. Not bad for having a spotless sun. Who needs them anyway?

I am flying back to the US as I type this. Obviously I will have to wait to publish it when I get home, but I thought I would write these thoughts down while they are still fresh. I have been writing a little about my trip to Europe, but the trip has been very busy and I have gotten behind. So, I will go back in time a few days to catch up.
One of the reasons for this trip was to attend the Friedrichshafen Ham Fair. I was attending the convention for the first time and I was not disappointed. The Ham Fair has a large hall of vendors with all the major radio brands and the latest gadgets, a nice stream of lectures on a wide variety of topics, a nice flea market full of classic gear and hard to find items. But best of all the the opporunity to renew acquiantances with old friends get acquainted with new friends. 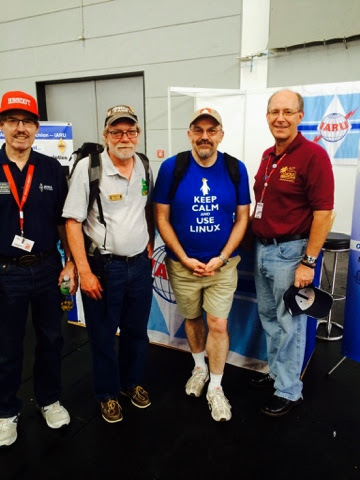 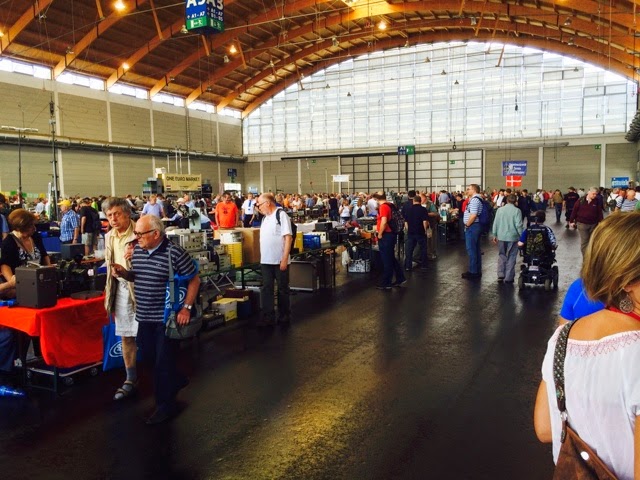 One of the Flea Market Halls
A few things about the convention were notable. First of all, most of the national societies from Europe have booths there. Only a few had meaningful displays, but they all flew there flags proudly. Additionally          ,       in the flea market, there was an abundance of surplus WW II vintage radio gear. When you think about it, it makes sense. Only a small percentage of the gear used in the war made it's way back to the U.S. There were some very interesting pieces of equipment. You could have purchased a completely restored Enigma machine for 33,000 pounds sterling . The Enigma was a device that was used by the Germans during the war to code messages. There was a huge effort by the Allies to figure out how to decipher these coded messages. There is a museum commemorated that effort at Bletchley Park in England. 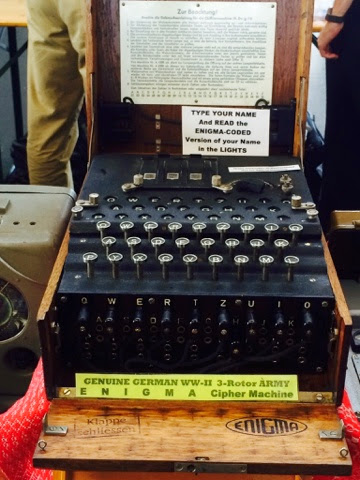 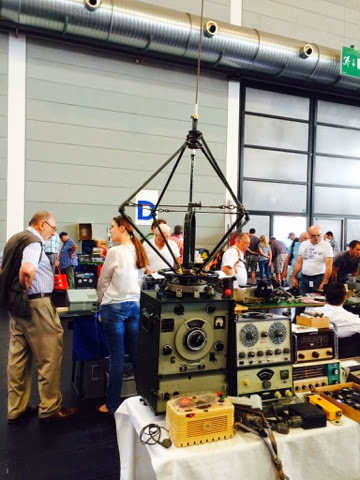 An Interesting Piece of Military Radio Gear
Lastly, the surrounding area around Friedrichshafen is beautiful. The town sits on the shores of Lake Constance. You can set on the shores of the lake and see the mountains of Switzerland and Austria.
For the American visitor to Friedrichshafen, you can feel comfortable that there is enough English spoken to get by on most things. However, it is wise to study a little basic German, expecially if you will rent a car, to understand traffice signs and to figure out menus. That said, it is not a big problem. The program of lectures will let you now what language the sessions are in, so you don't have to wonder if you can understand the presentations,
It is a very worthwhile trip for many reasons. I wiould highly recommend it.
Posted by Mike Crownover AD5A at 9:11 PM No comments: