I was too busy and tired yesterday to update my blog, that's because it was a busy day. I attended the Ham Fair in Friedrichshafen for the first time and was favorably impressed. The Ham Fair is very well organized and in addition to the goodies I was able to meet some old friends and make some new ones.
Another thing on my mind for this trip however was to activeate three local summits. My primary decision was when would be the best day to do it. The forecast for Saturday was 50% chance of rain and Sunday was 100%. This made the decistion easy. So after lunch, my XYL and I went back to the hotel room, changed into activatoion clothes and headed out. My plan was to activate three summits:
DM/BW-348     Gehrenburg
DM/BW-349     Aacheck
DM/BW-350     Rinkenburg
All summits are within a 20 mile radius of Friedrichshafen. I activated them in numerical order.
I won't belabor the activations. They went smoothly for the most part, but a few observations. First, the surrounding area is beatiful. The drives down the narrow roads and paths that have existed for centuries certainly has an Old World feel. 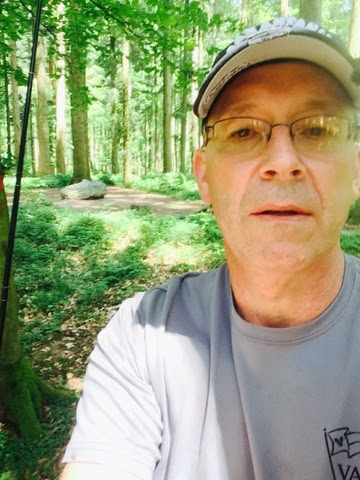 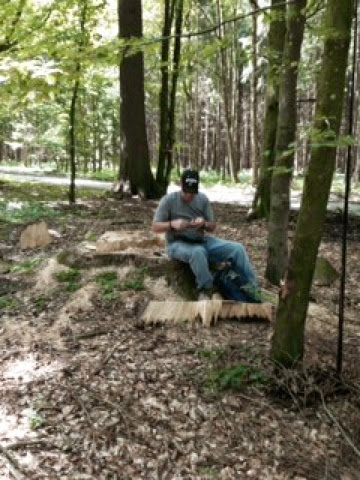 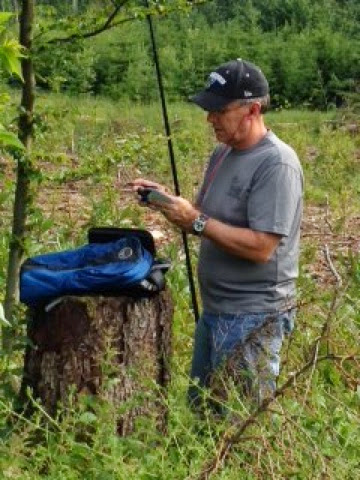 Operating from Rinkenburg
All three of these mountains have large summits. The areas are heavily forested with plenty of nice places to operate. The last activation, Rinkenburg was heavily was more dense that the other two. I choise a place just below th summit in a meadow thath had been cleared by logging. As you can see in the picture, I used a stump for a shack desk.
Another lesson learned is that 40m is the best SOTA band for Europe. Forty metters defiinitely attracts  the most chasers and 20 meters is much less productive, 34 of 51 QSO's made in total or 66% , were on 40 meters.
So it was very good day. Friedrichshafen and SOTA points, enough said.
Posted by Mike Crownover AD5A at 3:17 PM No comments:

I am writing this from Zurich. This is the first of 11 days in Europe, a trip has a heavy radio theme. Tomorrow the Ham Fair in Friedrichshafen get's kicked of and I will be there. This will be my first trip to Europe's largest amateur radio event. I am excited about meeting some friends I've never met.

Next weekend is the 50th Anniversary of the IOTA Program. A celebration and conference will be held at the Beaumont Estates in Windsor, near London. I have participated in IOTA for over 20 years and will see a lot of old friends there.

I also want to activate a few summits as time allows, which brings me today's highlight. Even though I am jet lagged, I managed to activate Altberg, HB/ZH-015, which is worth 1 point. This summit has been activated 613 time counting my activation today. When I saw that, I thought this must be a drive up and an easy one at that. While this is not a difficult summit, it does require a 2 mile +/- roundtrip and 300 feet elevation gain. Very nice trail and a nice walk.

We had an interesting encounter with three elderly guys on the trail. None of them spoke a word of English and the only German I know it Guten Tag and no spreichten Duetsche. So imagine me trying to explain what I was doing on their mountain. I did finally get the concept across that I was a ham. I'll mispell this but is something like amateurfunk. We had all heard that word. The next obstacle was to explain my morse key. The term "morse code' met with blank stares, but when I said, "you know dit dit a di di dit". Ah, "morse' ya. They were having as much fun with it as I was.

My XYL, but with her camera, so we can't download them to iPads, but I did take a picture of my travel right. An MTR, 13' telescoping pole, 9V battery, ear buds and a micro key. I managed 12 QSO's and activated my first EU summit and my first HB9 summit. 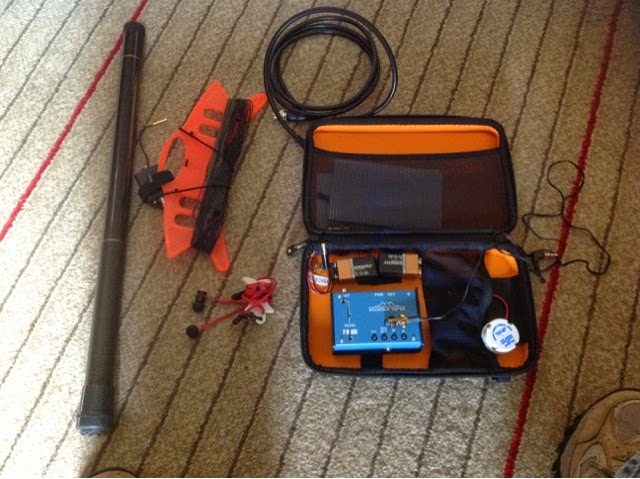 Posted by Mike Crownover AD5A at 10:42 AM No comments:

I am a week delayed in documenting this adventure, however, I had to write about it. I went back to my QTH near Santa Fe on Father's Day weekend for some SOTA therapy. I needed to fuel my addiction. There is a great SOTA community in Santa Fe and the surrounding area. The area boasts four SOTA Goats (SOTA Progaram Activator Award), KT5X, KE5AKL, NM5S and the most recent K1JD. Needless to say any non-goats must understand that there are certain expectations. Accordingly, I hooked up with Doc, K7SO on the weekend to try to gain some ground on attaining, Goat Status.

The first two summits are east of  Taos, NM. Doc and I had done these summits before and with the coordinates where to park, getting these summits activated was a matter of course. Each requires relative short hikes to the top, but bushwhacking is the order of the day, with the ascent of Summit 10900 being the most diffiicult of the two. There are lots of downed trees that have to be navigated.

The main obstacle of the day was a recently fallen tree that blocked the road to Summit 10900. Not worry, my Jeep was able to get around the tree with a little off roading. A longer wheel base vehicle would have had trouble getting around. BTW, the jeep came in handy all day long, the roads we travelled had sections that the 4WD and high clearance came in handy.

We did see some wildlife during these activation, including several Elk, Whitetail Deer and some turkey.

Getting to Greenie Peak was more of challenge than we expected.  Greenie Peak is near Red River, NM, which is an hour plus drive from Summit 10900. I had done the peak in the past, but a friend had taken me there on a Razor, a two passenger ATV, and I didn't pay much attention. Consequently when the GPS sent us up the wrong road I willingly followed. This road was a 4WD only road, with warnings, and a sign that said "Exploration Road". Well, we were in search of Goat status, so onward and upward. The road was a one lane, rock filled, steep, hairpin switchbacks to a small summit only big enough to turn the Jeep around on. Sorry Doc, but this is not Greenie Peak. Back down we went. Finally found the road, made the Greenie Peak summit. To expedite the activation we only set up one rig and Doc and I alternated contacts. We worked the pile untill CQ's went unanswered and called it a day.

I had left my house at 7:30 am that morning to drive north to pick up Doc and finally got home that night at 10:30 pm. A 15 hour day of SOTA therapy. I was tired, but I did feel good about getting 30 activator points for the day.

Sunday was a new day, with two summits on the agenda. Barrillas Peak (W5N/PW-022) and Bear Benchmark (W5N/PW-014).  Doc was using this KX3 set-up again, but I swithed the the AT4-S, KD1JV designed CW only radio. The weather was a duplicate of the day before, but the wind had diminished considerably.

The hope was to get these two done and get a home alittle earlier. Barillas went off without a hitch. There is a firetower on top, with nice views. Propagation was good, but it was Father's Day, so I think a few of the chasers were occupied with other activities.

Getting to Bear Benchmark proved a little more challenging. My GPS is set-up for the shortest route which is good most of the time, but not for this day. We followed a road for several miles only to come to a locked gate with "No Trepassing" signs all over it. Bummer. It was getting late in the day and I felt that we wouldn't make the summit in time. We turned around, somewhat disappointed and headed back down. However, when we got back to the main road, I wanted to find the right road at least. We reentered coordinates and the GPS point us a different direction, which to make a long story short, was the right direction. Once on the right road, we decided to go for it and when finally reached the firetower atop Bear Benchmark, the determination was rewarded. We, again, only set-up one station, and took turns calling CQ until we had worked down the pile.

I made it home just in time to watch my favorite basketball team, the San Antonio Spurs put a beat down on the Miami Heat and win the NBA Championship. A good day indeed.

Below is a brief  video of our adventure. I must give credit to Cris who gets credit for putting this together.


Posted by Mike Crownover AD5A at 9:55 AM No comments:

I received my ARRL Centennial Paddle recently. It is a Vibroplex paddle with my call and serial # on it. Very nice paddle. 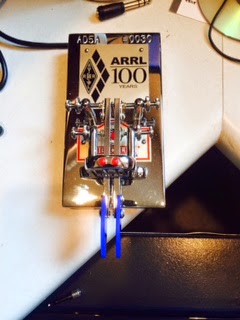 I hooked it up and it has a very nice feel to it and it's a great momento of 100 years of the ARRL.﻿

I just came across this on the internet the other day, but I thought it was a very cool way to package the KX3 for portable operation. 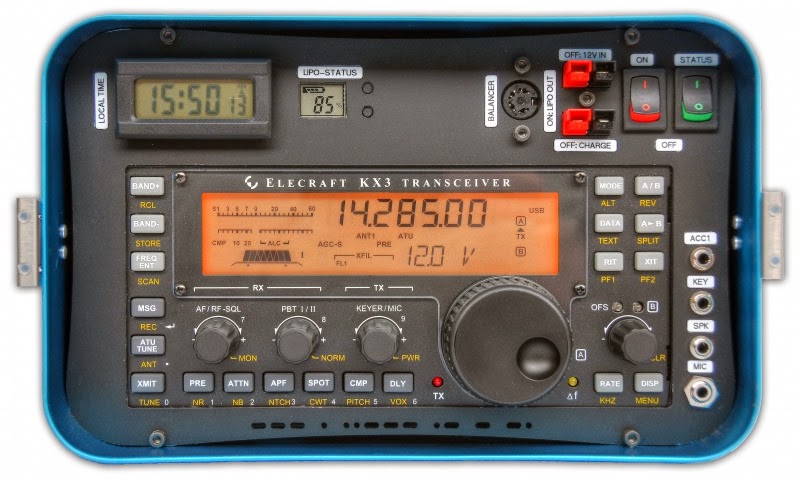 If  someone would commercialize this, I think it would be very popular.
Posted by Mike Crownover AD5A at 12:31 PM No comments: