As I have blogged in past, I have a QTH in Santa Fe, NM. I have 5 acres, but according to the deed restrictions all I can do is look at it. No towers, no antennas, nothing. Since I spend most of my time here activating SOTA summits it's not that big of deal, however from time to time there is something I might miss because I have no HF capability, plus I like to chase SOTA peaks as well and I haven't been able to do that from here.

So with the help of Hector, XE2K, I am now able to work HF from here in a couple of ways. The first challenge was the antenna. While there is strict prohibitions against transmitting antennas, there is nothing prohibiting flagpoles. So I got permission to put up a flagpole. The flagpole I bought was from ZeroFive antennas. I bought the 20 ft. version. which is resonant on 20m with no tuning. I am using 16 43ft. radials However, I also put a SGC remote tuner at the base, which tunes all bands from 10m - 30m. Hector, who is very good at expanding the capabilities of any antenna, suggested we add a radiating wire to the mix. So we cut a 43 ft. piece of wire, attached it to the flag fastener and hoisted it to the top of the pole and tied off the end, in an inverted V configuration. the two antennas now are resonant, with the tuner, 10m - 80m. While it's not optimum, it is functional and now I'm on the air. In the photo below you can see the flagpole and the wire that makes 40m and 80m possible. 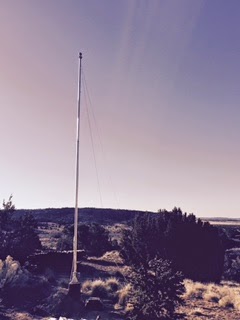 The next HF solution is to remote into my K3 at my home QTH in Texas. So I bought the K3/0 which is the remote radio device along with the RemoteRig interfaces. It is also now functional. So if I need a beam, I have access to that as well. So I am back in business on HF. Below is a look at the station. The K3/0 is on the left and an Icom 7200 on the right. 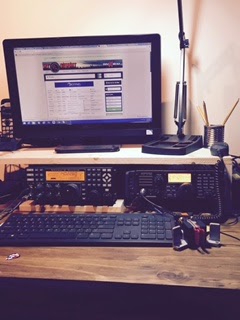 Email ThisBlogThis!Share to TwitterShare to FacebookShare to Pinterest
Labels: Antennas