Emory Peak (7,825 ft) is the highest point in Big Bend National Park in Texas. As previously posted I had activated Mount Locke  in the Davis Mountain the day before. Mt. Locke was a relatively easy activation , but I would earn my points and more on Emory Peak.

For those not familiar with the Summits on the Air (SOTA) program there are bonus points added for activating a summit either during the winter in cold climates or during the summer in hot climates. West Texas is definitely a hot climate. Emory Peak is a 10 point summit (maximum), but activating in the summer months is worth 3 extra bonus points. On the drive from Mt. Locke to the Big Bend area temperatures hovered between 99 F to 101 F. The temperatures would moderate a little at the Chisos basin where we were staying, although not a lot. The Chisos Mountain Lodge is around 5500 feet in elevation, but the high temperatures during this time of year are in the low 90's.

The Chisos Mountain range within Big Bend National Park is a beautiful place. Emory peak may be the only peak that is climbable, but even then, you must climb the last 35 feet using some, not so easy, rock climbing techniques. I would not recommend it if you aren't experienced.

The trail to the summit of Emory Peak is a very nice trail. It is well marked and maintained. The only issue is that the round trip is 9.4 miles and there is 2,500 feet of elevation gain. Given that distance the elevation gain is not particularly difficult, if you are accustomed to mountain hikes, but it is a long way. 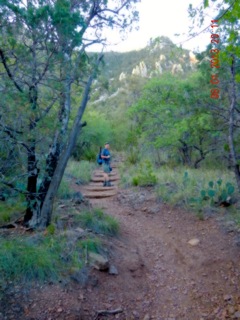 Emory Peak Trail
The Peak is in the background

We started relatively early, 7:30 am.  I wanted to start sooner, but my XYL was nervous about the warning about hiking too early. The Big Bend National Park and the Chiso's Mountains in particular have Mountain Lion and Black Bear populations. Both are sighted quite often, but Mountain Lions in particular are active in the early morning. We had to check out of our hotel room at the Chisos Mountain Lodge by 1:00, so we needed to depart the summit by 10:30 by my calculation to get back in time. I figured 2.5 hours up, 30 minutes to operate and then 2 hours back down. If my calculations were correct, 7:30 was the latest we should start. My wife and I are in relatively good shape, so I felt 2 miles an hour was a doable pace considering we were gaining 2,500 feet.

The hike up wasn't too bad. Most of it is in the shade as the sun comes up over the mountains. It is a nice hike through a mostly forested trail. The last mile up was exposed to the sun, but there were still patches of shaded forest and the temps were bearable. We reached the summit around 10:00 am, right on schedule.

From my research I know that there weren't any tall trees on the summit, so getting an End Fed Half Wave antenna high enough would be an issue. I also know that time would be short with a hike this long, in the heat, so I needed to be able to deploy quickly. I decided on the Buddi-stick vertical. I only planned to operate on 20m, given the short time, so the vertical made sense. 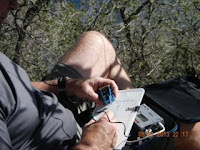 So I quickly deployed the station knowing that I would only have a short time to operate. I propped he vertical against a tree limb and then extended the counter poise over another limb. I took out my SOTA notebook station, seen above, plugged in the LIPO battery to ATS-4 QRP radio, grabbed my Porta-Paddle and I was ready to go. I called my first CQ at 10:13 am CDT. My good friends from Santa Fe, NM, Doc, K7SO and John, K1JD were monitoring my advertised frequency of 14.061. Doc answered my QRL? :-) John quickly followed. What then happened was SOTA bliss. The vertical was working well and in the next 15 minutes I made 21 QSO's. I wished that I had more time, but we needed to get off the mountain, both to beat the heat and to avoid an additional day's charge on our hotel room. So I took the station down as quickly as it went up, packed it all up and Cris and I headed down the mountain. We didn't get away until 10:45, a little behind schedule.

The trip down was uneventful, just long and the last mile or so, the heat was getting just a little on the uncomfortable side. However we were fully prepared, we carry 100 oz Camel Back water bladders in our pack, so we stayed hydrated. We made it back to our room at 12:55 pm. The good people at the Chisos Mountain Lodge let us shower and clean up before check out without an additional charge. I personally think it was self serving on their part as they didn't want us eating in their restaurant smelling like we just came off the trail:-)

This was a challenging hike, but completing it left us feeling good that we can still do it. The radio portion of the adventure came off without a hitch, so it was a good day in the Chisos.
Posted by Mike Crownover AD5A at 10:20 PM