On my vacation I took the opportunity to activate several SOTA (Summits on the Air) summits. This post deals with four that I activated in the W1 call area this past week. The references below are the SOTA references and the points are what each summit is rated. The points are on a scale of 10

This is a tough 4 pointer. With over 2,000 feet of prominence I under estimated the mountain and made a few mistakes as well. First I counted on my grandson to carry the Buddi-stick, he forgot it and I didn't double check. Thankfully I had an EFHW with me, but only a 13 foot pole to run it from. There are no trees on the summit. Accordingly I think my signal suffered a little. It was very windy and cool on the summit and relatively crowded, which ultimately shortened our stay. I used an FT-817 on this activation because the original plan was for my two grandsons, KF5GYD and KF5GYE to operate some SSB, however conditions were marginal for CW, so we weren't able to execute that part of the plan.

The trail up is one granite rock after another. I had envisioned a wide, sodden trail to the summit, but that is not the case, lots of scrambling up granite slopes on a trail that goes straight up. For those familiar with the mountain, we took the White Dot Trail up, the more direct, and the White Cross Trail down. Coming down is tough because its like descending on a path of uneven steps and no real opportunity to enjoy the downhill slope and some relatively steep pitches down granite slabs. Two hours up and 1.5hrs down. I was able to make 7 QSO's from here (it only takes 4 QSO's to qualify for the points). I did work G4ELZ and S58AL to spice up the day. 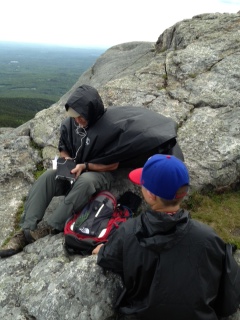 The morning dawned with steady rain and the forecast called for more. Not a good day for a hike. We decided to travel to the southern coast of Maine. A quick check of the SOTA database revealed a drive-up one pointer, Mt. Agamenticus. Easy, right. Wrong. My grandsons and I set up, after the ceremonial climb up the last few feet, on a picnic table in the blowing rain and zero visibility. Let's get four quick QSO's and get out of here. What I didn't know was that the A-index was 34 and the K was 4. Over an hour later I made the fourth QSO, way too much work for one point. This day was our 38th anniversary and Boogies 11th birthday. 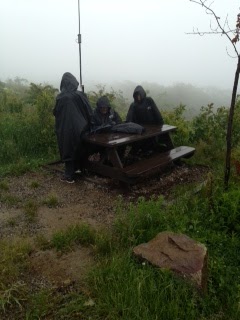 The station on Mt. Agamenticus with
KF5GYD and KF5GYE (Reid)

Equinox Mountain is near the town of Manchester, VT. It is an 8 Pointer, with a road to the top. I decided to make the most of my remaining time in the region and a drive up would save some time and give me a shot at getting another summit in. There is a toll road to the top and there is actually a functioning monastery on the mountain. Again visibility was near zero on the summit and misting rain. I first set- up with the vertical and had some success but it was noisy as conditions still weren't very good, so I was able to get some height on the EFHW, lashing my telescopic pole to the balcony of the visitor center on the summit, and made a few more QSO's finishing with 10. I started with the FT-817, but finished with my MTR which I discovered has a better receiver in noisy conditions.  No real DX from here, NS7P from Oregon was my most distant contact. 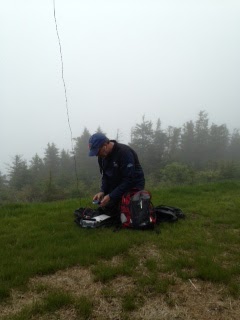 Operating on Equinox Mountain with an
EFHW and the MTR

Mount Snow is a ski mountain with a lift most of the way up the mountain leaving a relative short but steep hike to the summit. The question was whether I could get the QSO's I needed in the time I had. We arrived at the mountain at 3:00 and the lift closed at 4:00. We summited at 3:25, set up the vertical with one grandson holding the trekking pole mounted vertical, the other holding my battery and me with the MTR, micro key and log and we were on the air by 3:30. DJ5AV was the first in the log and CT1BQH followed a couple of minutes later. By 3:40 I had 6 QSO's in the log. A quick tear down and back to the lift by 3:55. Made it. This one was the most satisfying, six points I didn't think I would get. 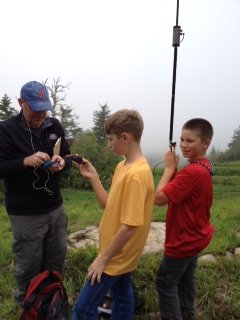 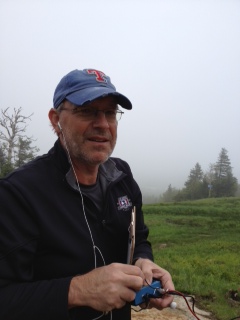 Me calling CQ with my Micro Key and MTR

My wife of course accompanied us on this trip and was a real trooper. She came along on every activation and was there to lend a helping hand when she could. Her name is Cris and her call sign is KC5HZQ, but she only has a couple of contacts in her ham career. Below is a picture of her on Mount Monadnock. 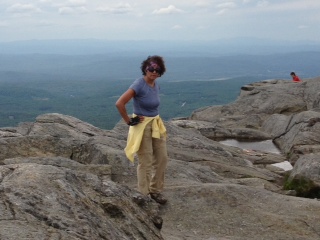 Cris KC5HZQ
The day before our 38th Anniversary

This was a fun trip and I learned a lot. I will be making some changes to my operating strategy that I will be writing about in the near future.